Not many people know this but Sam Menche, the owner of Everything Australian, is a style icon. No really, he has created one of the most iconic Australian garments of recent years, donned by (small) members of the royal family and given by the government as gifts to visiting internationals.

Of course, we are talking about the number one oilskin jacket worn by dogs the world over, the Driza-bone Dog Coat!

Back in the early 2000’s Sam was still selling out of the Queen Victoria Markets in Melbourne, making his own leather hats, Japara’s and moleskin jeans, as well as stocking Driza-Bone oilskins and Akubra hats.

He was a small retailer but punching well above his weight, one October in the 80’s he was responsible for a third of all Drizabone stock sales, so you could say he already had a great working relationship with the long-standing bush-wear company.

Things were feeling a bit flat at the markets and Sam was looking for something new when one day he was strolling down Glenhuntly road and inspiration hit when he found himself in a local pet shop. The rest, as they say, is history. Sam rushed home to pencil out a bit of a pattern and included the famous cape silhouette and the classic pocket shape of the Driza-Bone stockmen’s jacket. He took it to his top "maker-upper" guy.  He smiled and said, “You’re mad,” but he went ahead anyway and made up the first ever Driza-Bone style doggy coat.

And it was a beaut. He knew he was on to something when he took it to his staff at the markets to get their opinion, and as soon as he got it out of the bag, customers started wandering over to have a look. One even offered to buy it then and there. That was all the confirmation he needed. He said, “Not for sale… yet!” and stuffed it back in the bag and took off to register his design with a little skip in his step.

The next week it was all go… on Monday Sam sent the design to Drizabone, Tuesday he got a call from the general sales manager, Stephen, by Wednesday, Stephen and Sam had shaken hands in a gentlemen’s agreement and two thousand coats were ordered. After Steve left, Sam turned to his partner and said, “Slap me, I’m dreaming!”

When the dog coats made their debut at the markets, Sam was a little shy about putting them out the front of the stall. He placed them in the middle, and worried that they weren’t selling. One of his staff decided to put them in the front and boom! Seven sold quick as a flash. Stephen rang at the end of the day to see how it went and was told they were a little winner, “Beauty!’ he said. Sam says working with the Drizabone company has been a dream, “I received 15 years of royalties from the dog coat on a traditional handshake agreement. They are honourable people, and I’m proud to be part of their story.”

Sam says that in life, he has been very fortunate, but he puts it all down to pure luck. We reckon its because he’s a hard-working man with a head for design and good, old fashioned customer service, and that has taken Everything Australian from its humble beginnings at the markets to becoming the leading online retailer that it is today. 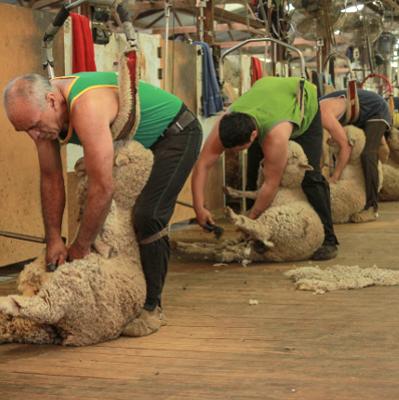 How Aussie Are Your Uggs?