Queens’ Birthday weekend has come and gone and while we were all enjoying the time off the Queen was busy dishing out this year’s honours, and one of those honours went to Aussie icon of the screen Hugh Jackman.

Hugh has always been known as a fashionable man both on and off screen, this year he became the face of R.M. Williams equally iconic Craftsman boot, probably because Mr Jackman is arguably the epitome of sophisticated Australian style, just like the Craftsman.

To become such a style icon is about much more than just the fashion. An icon portrays confidence, charisma and sense of assurance – all of which Jackman emits effortlessly.

Apart from a top-notch boot, there’s another wardrobe that’s essential to Hugh’s signature style and its something he is rarely seen without, that is his vast array of hats. Its well documented that Hugh is a big Akubra fan and is often photographed out and about in his Cattleman.

Here, we examine some of Hugh’s finest hat moments and look at how you can achieve the look with Akubra hats. Hugh at the Airport in his Akubra Cattleman in Fawn

Well this one’s easy. Hugh loves his Akubra Cattleman and so do many Australians. Its Akubra’s most sold hat.The Cattleman is an everyday casual classic that is as at home in the city streets as it is in the country. You can spot an Australian at an airport worldwide by looking for the Cattleman. And if you do, you never know, it might just be Mr Jackman. Hugh sure knows how to class it up with the best of them. Helping him achieve new levels of gentleman style is his classic black Fedora and the Akubra Stylemaster is just the Fedora for the job. We stock all sizes these hats in Carbon Grey and Acorn Fawn but if you are looking to team the Fedora with a suit you can’t go past Black. It is a made to order colour, though, with a four-month lead time so you will need to plan ahead if you want to become a style master like Hugh. Hugh's Custom Made Akubra in the Movie "Australia"

This is the hat made famous in the movie Australia. The hat was custom made by Akubra and is an exclusive one-off design just for Hugh. With its curled brim all the way around and country style crown, there is not really any other Akubra’s that exactly match this hat. However, we can give a couple of suggestions of how you can get close. If it’s the brim you like, go for a similar style in the Kentucky rancher. If the colour, crown and size are more your style, try the Kiandra. Hugh in a Casual Trilby

The Trilby is a short-brimmed Fedora and is a fashionable casual hat. Mr Jackman is often seen out and about getting coffee and the like in a smart casual Trilby. The hat is super versatile and looks great with all casual wear. Akubra make a few great short brim Fedoras, but our picks would have to be the Trilby and the Hampton. Embellish the hat band on one of these little numbers with some Akubra Feathers for some extra style points. Hugh Chilling in his Cowboy Hat

Ok so now we are starting to realise that Hugh Jackman can pretty much make any hat look good. Just hanging out casually in a white t shirt and leather jacket, Hugh accessorises with a well-worn-in Western style Akubra for that quintessential all Australian look. To achieve this look we suggest either our most popular Western style, the Rough Rider, or go for a classic Burke and Wills. Hugh Jackman in a Straw Fedora

Hugh is obviously a big fan of Fedora’s, and there’s nothing more stylish and summerier than a Straw Fedora with a white shirt. Perfect for hanging out in the street talking on the phone to your agent or popping out for lunch. Akubra have several straw Fedora’s, in wide brimmed Panama styles like the Balmoral and the Country Club, to shorter brims like the one Hugh is sporting here. For this look, go for either the Capricorn, or the Casablanca. 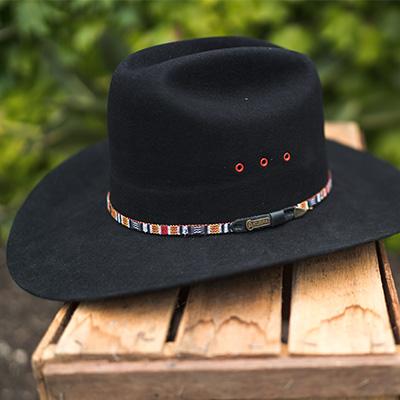