Having spent time and a boatload of money exploring some of the more popular islands of the Great Barrier Reef such as Lady Elliot Island and Hamilton Island in the Whitsundays, without a doubt my favourite would have to be the much less advertised Magnetic Island.

Only 8km and a $30 ferry ride from Townsville, Magnetic Island has just about everything paradise seekers could ask for, and a whole lot more. The Island got its mysterious name from the compass disruption of explorer Captain Cook, who wrote in his log book that the source of the disruption was coming from the island, and therefore it must have been magnetic. Over the years a few scientists and explorers have tried to recreate what Cook must have experienced around the island, but to this day no one has been able to prove the magnetic qualities of the isle.

The Island also has an interesting history. Early transient Aboriginals, the Wulgurukaba, or the “Canoe People” left their marks across the bays in the form of cave drawings, which can still be seen today. Later, due to its views of Cleveland Bay and proximity to the Townsville defence bases, a large battery fort was built on the island among fears of a Japanese invasion of Australia.  The fort ruins can be visited by foot in one of many incredible walks on the island. Magnetic Island offers an extensive 25 kilometres of walking track through the National Park, which makes up 54 % of the island. Those wishing to leave civilisation behind can wander amongst the 800 dozing Koala’s that call Maggie home, rambling over mountains and following trails to one of the isles 25 idyllic and secluded beaches. The island is a goldmine for wildlife spotters, apart from the Koala population, rock wallabies are abundant, as well as flying foxes and over 100 species of birds. The experience of abundant life on Maggie only gets better when you venture onto one of the white sand beaches and hop into the ocean for a spot of snorkelling. Small coral reefs are dotted around close to shore in Florence, Nelly and Alma bay and offer a world class snorkelling experience. In half an hour under the water I was treated to clown and parrot fish and a couple of sea snakes, as well as whole host of colourful little reef fish and sea turtles. For an extended wildlife experience visit Maggie in June or July for the Butterfly Forest walk. An easy, flat stroll from horseshoes bay will see you weaving through hundreds of thousands of Blue Tiger butterflies that have migrated to this magical spot every year around this time.

After all that experiencing nature in its finest, when it comes to hospitality, Maggies got you covered there too. There’s something for every kind of budget, from 5-star restaurants to beach side burger joints. And when it comes to spending the night, the same goes, from luxury stays to YHA’s, you can extend your time there no matter how much you have in your pocket. No wonder Townsville locals have adopted the island as a suburb of the northern city. The most lasting impression for me was just how absolutely beautiful the place is, with its jewel-like bay’s sparkling in the sun and endless forests.  Whether or not the island did influence Cook’s compass there no denying Magnetic Island certainly has a pull that keeps you wanting to go back. 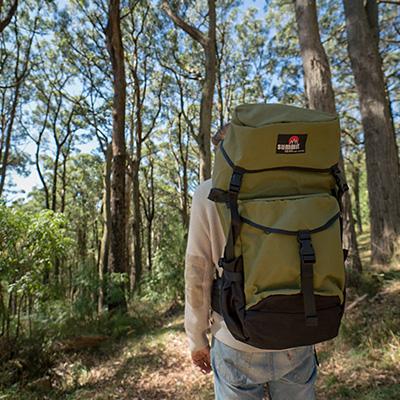