It's a funny old thing, to see someone take a brand new hat out of its box, one that's cost them a fair hand of dosh, a piece of craftsmanship that takes 19 stages and 60 sets of hands to create, to see a bloke take that beautiful hat from its exquisite boxing, and throw it on the ground and stomp on it.

And yet, to me, that's a perfectly fine thing to do. The Akubra is made to take a battering, and if you're an old cocky like me, you like it to look like it’s been through a bit of wear and tear. Of course, you have your Sunday best hat that you keep for the saleyard or the races, and you keep that pristine, but your workaday mustering hat? Throw it on the floor and jump on it.

I was pleased to read this tradition has made it in print the other week when flicking through the Oz. There's a gorgeous yarn about my mates at Akubra in there, and the trouble they go to make Australia's most iconic hat. You should have a read if you get a sec. 'Course, if you get one of their more fragile fashionable numbers like the Stylemaster or one of the straw ones like the Balmoral, you're not gonna go making a liar of me and be stomping on your new hat, will you now? It's their classic hat styles we're talking about here like the Cattleman and Territory, they simply look better worn in.

They've still got all their operations up there in Kempsey, up past Port Macquarie and just inland from the appropriately named Hat Head. Awww, it still gives me a giggle when we pass a sign to Hat Head. What a funny old name!

The Keirs have been making hats out of Kempsey since the seventies. Before that, they were in Sydney, and before that, Tassie. In 1870, Benjamin Dunkerley invented a machine that took the tip from rabbit fur, just leaving the lovely soft felt for making material with. The Keirs are the great, great grandchildren of Benjamin - the business never changed hands!

Akubra made hats for our diggers right through both world wars, but the association died off til recently, and Akubra are back supplying Aussie soldiers with the best hat money can buy.

It really is a labor of love for the Keirs. They are in the hat-making business, so they like making them here, despite the extra cost. It's the craft of the thing. They had a lovely quote from a retired worker who was involved in the move to Kempsey - he called it "artisan manufacturing". Isn't that a beautiful phrase? The art of making each hat is very important to Akubra.

“It’s everything,” Roy Wilkinson, top bloke and right hand man of Stephen Keir IV, said in that piece in the Oz. “I often say to people that if we went offshore tomorrow we could probably double or treble our bottom line. But the generations of Keirs that have run the business have always wanted to make hats. They’ve always wanted to make them in Australia. They’re very committed to Australia. And certainly in recent times it’s become more difficult. You could argue that it’s tempting to consider the offshore alternative. But it’s not something that has ever been seriously discussed. I work with Stephen [Keir] every day. He’s got absolutely no interest in going offshore. He’s even said to other people in the past that ‘The day we go offshore is the day I retire; I won’t do that.’ It’s not something he’s ever going to entertain, at least in the headwear area.”

And their values are Aussie to the hilt. They look after their employees like family and have re-mortgaged the house rather than lay people off in the tough times. Wilkinson says of Stephen Keir III that he was the most honest and ethical person he knew, and he was loathed to put the prices up if there was a drought or the country was going through a rough patch - no matter what it meant for the business. And he'd fight like hell to make sure he got his way. "We can’t do it and I won’t do it!" he'd say.

So there you go, Akubra couldn't be more Aussie, and they will be Aussie for a good long while to come.

And let me tell you - you really couldn't find a better hat.

For more on choosing the right Akubra: 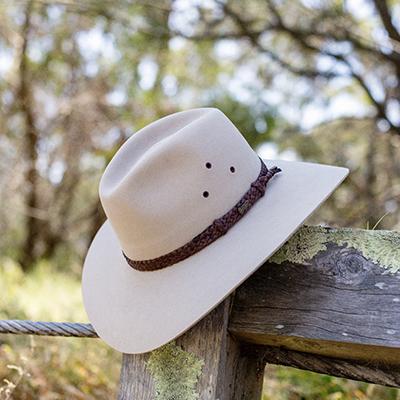 With a long-time involvement in the industry of selling hats and an impressive collection of his own, Mathew is our in house expert when it comes to Akubra’s. He is the one who knows everything there is to know about the iconic Australian brand, and then some.

With a long-time involvement in the industry of selling hats and an impressive collection of his own, Mathew is our in house expert when it comes to Akubra’s. He is the one who knows everything there is to know about the iconic Australian brand, and then some.